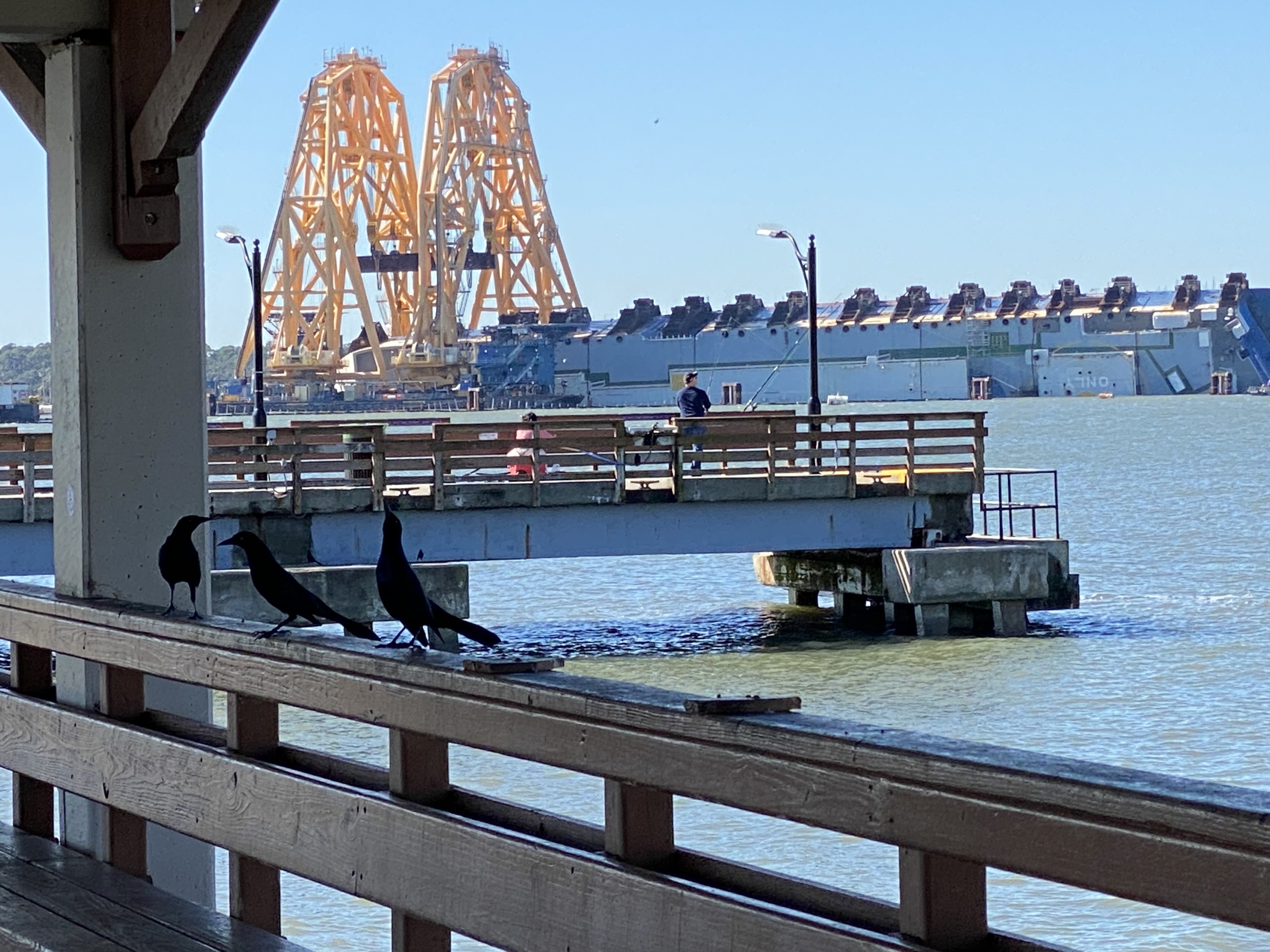 Today, if you stand on the St. Simons Pier and look across the Sound to Jekyll Island you will only see the remains of the worksite of the Golden Ray, Thankfully it has now been removed.  For over two years, you could not miss the hulking wreck of the cargo ship “Golden Ray”.  The sight took your breath away and was utterly incongruous with the beauty and serenity of our most Golden Isles.  As a volunteer, I was an eye-witness to part of that fateful night the Golden Ray sank.  This is my first-hand witness of the heroism and skills of the talented Seamen and the first responders.

The night the Golden Ray foundered...

I was awakened abruptly at 2:30 in the morning by a phone call from my friend Cap Fendig.  Cap called to ask if I could come quickly to the marina - he explained there had been a ship accident in the sound, and there might be sailors in the water.  Volunteers and extra boats were needed for possible search and rescue.

I rubbed my eyes, dressed quickly, and ran out the door.  As I drove to the marina, I could not help thinking back on another accident that occurred here in 1972 when a ship struck the Sidney Lanier bridge.  Lives were lost that night, and it was a major tragedy for our community. I prayed fervently that would not be the case again.  When I arrived at the marina and found Cap’s boats, I joined a small group of volunteers. Reid Harris was there, and he explained that we were to stand by and wait for directions from the Coast Guard.

While we were waiting, we listened on two separate marine radios to channels 16 and 72, where the Coast Guard and first responders were communicating.  I immediately recognized the voice of  “JT” - Jonathan Tenant, the local harbor pilot captaining the Golden Ray who was still aboard the capsized ship and coordinating efforts from the deck.  I also heard Bruce and Edwin Fendig, two more of our local Harbor Pilots who were working directly with the Coast Guard boats in the water.  As our group listened to the rescue unfold, what struck me most was the professionalism of these men as they were working the scene.  In spite of the harrowing and dangerous situation at hand, there was a calm and organized demeanor in their communications.  Everyone had a clear focus on the importance of accounting for and rescuing the ship’s crew, and that required everyone to use their varied skills, working together in unity.  Even dangling from a sideways command post, JT found a way to communicate clearly from the bridge of the ship until he was eventually rescued by a Coast Guard helicopter.

By 5:00 am, all of the sailors were accounted for and most were rescued by our brave Coast Guard crews, minus three men who were stuck in the hull of the ship.  My group of volunteers was told to stand down and were free to go, so I left the marina and hurried over to the Village to witness the ongoing rescue operations.  I stood at the end of the Pier and watched as a harbor tug pushed the stern of the Golden Ray continuously to hold it in place, and there were dozens of boats and several helicopters moving all around the site. I knew that I was witnessing a heroic and coordinated effort to keep the Golden Ray in shallow water and prevent it from sliding back into the deeper channel.  As the tugs, pilots, and Coast Guard continued to work in unison, the final sailors were pulled out of the hull a few days later and thankfully no lives were lost in this accident.

Although our community has had to endure several different hardships as a result of this tragedy,  I am thankful for the knowledge that our local first responders are well-trained professionals who not only made sure all souls were rescued but had the seamanship and courage to keep the Golden Ray on the sandbar, preventing further impacts on our shipping industry.  I am thankful knowing that we have excellent harbor Captains like Jonathan Tenant and Bruce and Edwin Fendig keeping watch and ensuring safe shipping in and out of our Brunswick Harbor.

And finally, we can all be THANKFUL that the last cut has been removed.  As we wave goodbye and say “Good riddance!”, let us also say a prayer of thanks for our local heroes of the waterways, and remember they are another reason our Golden Isles are such a great place to live.